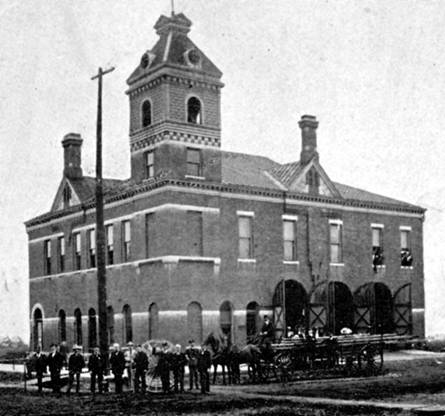 Photo of the original fire department, which was part of the City Hall building on the corner of Fourth & Park Avenue. Members of our paid, reserve and volunteer staff are proud of this department’s history, and would like to share some interesting facts about it with you.

Established in the late 1860’s, the Fremont Fire Department was the third fire department in the state of Nebraska. Several fire companies made up the early Fire Department:
These were all volunteer companies, which in 1890, boasted a membership of 182. A Board of Directors for the Volunteer Fire Department was formed in 1891. The board was made up of 16 members (two from each of the seven companies, plus a President and Vice President). This Board was the governing body of all the volunteer firefighters.

In 1888, the Fremont City Hall was built at the corner of Fourth Street and Park Avenue. This building also contained the fire station. A bell tower was erected in this building to call citizens with teams of horses to pull the fire wagons and hose carts. When the bell sounded, the first person to get to the station and hook their team of horses to a piece of fire equipment got paid for their services. In 1900, the city was split into six wards, with one hose reel cart placed in each ward.

The City of Fremont purchased a Wilcox Hose and Chemical Truck in 1911. This was the first motor driven fire truck in the state of Nebraska. A man was hired for $65 a month to run and take care of the truck. He became the first paid employee of the Fremont Fire Department.

In July 1937 the seven volunteer fire companies were reduced to four. The volunteer fire department remained divided into companies until about 1990 when “companies” were dropped and all members began meeting together under the heading of Fremont Volunteer Fire Department.

The current fire station, at 415 East 16th Street, was built in 1968 for $240,000. It houses three pumpers (two front line trucks and one reserve truck), one aerial, one water rescue / command center unit, and four rescue squads. We also have two paramedic bicycles and a boat that we keep at this location.

Our department’s fire protection area covers approximately eight square miles. Through our Mutual Aid agreements, our rescue squad and fire response does not stop at the city limits, however. It extends into the rural communities and surrounding areas, and our Advanced Life Support Service allows us to intercept critical patients when requested. It’s interesting to note that it was in the late 1960’s and early 1970’s that members of the department first became Emergency Medical Technicians (EMT’s).

The last thirty years have seen tremendous change in our rescue squad service. Defibrillators were introduced to the department in December 1989 and were a controversial acquisition at the time. The next year, members of this department saved their first life as a direct result of using a defibrillator. In 1993 the city approved the department’s request to become an Advanced Life Support (ALS) service. In 1995 we obtained our paramedic license. Today, one third to half of all our rescue squad calls are advanced life support (ALS).

We’re proud of our history. It’s reflected in a sense of tradition and “family” that our firefighters have towards their job and one another. The most outstanding part of the fire service is the heart of each firefighter. The best equipment means nothing without the commitment and dedication of our firefighters. We are determined to provide our community with the best possible service, now and in the future.